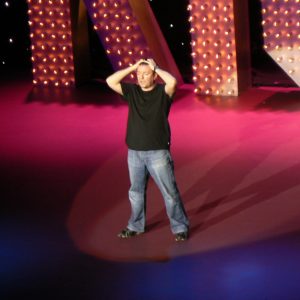 This year, Ricky Gervais strayed some distance from his usual field of comedy, posting a Christmas message for the Wall Street Journal, entitled Why I’m an Atheist. Within a week, the article had attracted nearly 6,000 comments.

A colleague brought my attention to the article and I’m glad he did. It was an interesting read. I commend Ricky for his honesty in expressing the reasons for his belief system at a time where personal belief seems an increasingly taboo subject.

Concerning belief, he makes a good point: “People who believe in God don’t need proof of his existence, and they certainly don’t want evidence to the contrary.” He’s right in observing the tendency to become entrenched in one’s beliefs and fearful of challenge to those beliefs. That is profoundly disappointing to me. I do not want to believe in something false, even if (as Plato observed) some good might come from that belief. No, I want to believe in something real and true, so far as such can be established. Therefore I welcome challenge to my faith. If the things I believe are true, they will stand up to any scrutiny and to the extent that I might be wrong or misguided, I want to be corrected.

Not all Christians feel the same way.

Where Ricky misses his own point is in neglecting to observe its application to him. In my experience, it is just as true to say, “People who don’t believe in God don’t need proof of his non-existence and they certainly don’t want evidence to the contrary.” Vast swathes of literature reporting miracles and the transforming effect of a personal relationship with God are dismissed out of hand. Let’s be clear: God, if He exists, is a spirit. What kind of evidence are you expecting?

But I agree with Ricky. When Christians (indeed believers of any persuasion) utter post-modern mantras like, “This is true for me,” or, “This is my reality – show me yours,” I cringe inwardly. Truth is not like that. In fact no one believes that, deep down. No one believes that the sofa that I’m sitting on has the capability of disappearing into non-existence in Schroedinger’s world between sofa and non-sofa. With the exception of a few very esoteric thinkers, we do all believe in the factual absolute truth that the sofa is not in my head.

If Jesus existed (and no serious historian now doubts that) then He was either truly God’s son or a lunatic. Let’s not be wishy-washy about that. There is overwhelming support for the fact that He made this claim. He had a reputation of performing miracles – this reputation was not confined to sympathetic or “Christian” writers. Jesus claimed to be the only way to God. There is no room in that view for half-hearted truth claims. Either Christ is the way for everyone or He’s the way for no one.

As an aside, this is where an accusation of intolerance is falsely levelled at Christianity. All world views have similar truth claims. Crusading atheist Richard Dawkins for example famously believes that parents teaching their children the truth of the Gospel are effectively committing child abuse. There’s tolerance for you. But I digress.

Let’s address the central point in Ricky’s world view: “I don’t believe in God because there is absolutely no scientific evidence for his existence and from what I’ve heard the very definition is a logical impossibility in this known universe.” This reveals that he has bought into the “enlightened” spirit of the age which wants us to believe that the only route to truth is through science. Since when did science acquire the monopoly on truth? For instance, ethics can tell us a lot about how we should practise science, but science can tell us nothing about how we should practise ethics. Science is a study of the observable universe, so it stands to reason (yes reason!) that it is in no position to comment on something unobservable or non-corporeal. If God exists, He is spirit.

I’ve recently been hearing about the Kalām cosmological argument which briefly states:

Modern science does not take issue with this line of reasoning. Most cosmologists, Stephen Hawking included, believe that the universe is not eternal, that it “started” at some point in time. But we know from experience (don’t we?) that things do not just spring into existence out of nothing. It never happens. Why should the universe be any exception?

This then leads us to account for the existence of the universe: at this point we have a choice which faith statement to accept since it becomes impossible by any known method (including scientific method) to prove something beyond the sphere of our own universe. Do we believe in magic? A supreme being? Or some other idea which science is bound to hit upon eventually? At this metaphysical level the most elegant and yes, logical, account for the existence of the universe is an eternal being with will and intent. That being has to be eternal since the being cannot itself have come into existence (that would stick us with an infinite regression). That being can’t simply be matter since we know that matter has a beginning.

So the definition of God, far from being a “logical impossibility in this known universe” is a logical necessity and remains the best explanation we have to date of the fact of existence.

“Arrogance is another accusation. Which seems particularly unfair. Science seeks the truth. And it does not discriminate.” Here Ricky is confusing science with scientists. Science is practised by scientists and, I flatter myself, I have enough experience of them to detect a tendency towards arrogance, bias and discrimination. That is not unique to scientists; we all are like this.

I don’t follow why Ricky believes the burden of proof for God’s existence is on the believer. Be that as it may, believers have been demonstrating the existence of God for millennia and can hardly be blamed if non-believers refuse to accept that demonstration.

Keeping it real, Ricky’s account of the loss of his faith is poignant and saddening. He felt that his mother’s imposition of faith upon him was a sham to encourage him to behave “properly”. Darkly ironic. You see the biggest hurdle for belief in God, for many, is the poor way that believers behave. This is inconsistent with the stated underpinnings of love. Jesus when asked what the greatest commandment was replied, “Love God. And love people.”

But far more serious than Christians failing to comply with their own requirements is atheists following through the logical consequences of their belief system. If the universe is impersonal and amoral, there can be no logical defence of an absolute moral standard. Atheists can defend a moral consensus as much as they wish, but there can be no particular logical reason why a Stalin, Mussolini, Hitler or Genghis Khan should not rise up again and genocidally attempt to accelerate evolution.

You say you’re trying to live a moral life. Good for you. But why should your morals have any impact on me? You’re in my space. So I’m going to kill you. That this reasoning is perfectly legitimate in the absence of an absolute moral standard cannot be disputed. You may not like it, but we’re not talking about like/dislike. We’re talking about right/wrong.

In my life I have experienced God’s intervention and known his love in a way that has surpassed coincidence and landed firmly in the realm of truth. I have tested this belief system and it has stood up to every challenge. When Christians talk about standing on a rock, this is what they mean. I embrace my faith and I embrace science. There is one important proviso: where my faith and science disagree, I have learnt to let faith preside over science. Experience has shown so far that science eventually catches up with faith, a trend I fully expect to continue, if science is indeed as honest as Ricky likes to believe.