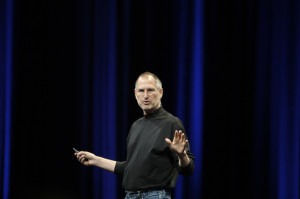 Business legend Steve Jobs died late last night. I heard about it through that most modern of news outlets: Facebook. I read the story on my company-supplied iPhone (which, by the way, I didn’t want; I’d rather use the Android that I keep in my drawer – long story).

The death of Steve Jobs follows the release of the much-anticipated iPhone 4S, the successor to the iPhone 4. Perhaps that ‘S’ should stand for ‘swan song’?

This morning, I mentioned Jobs’ death to a friend, who said, “Who’s Steve Jobs?”

Who’s Steve Jobs? I guess if you’re indifferent to technology and design, you could be forgiven for not knowing his name. But whether you’ve heard of him or not, his influence has almost certainly had an impact on you. The number of modern innovations associated to his name is impressive:

Given the number of patents that bear his name, I have inevitably missed some…

I am not an Apple fanboy. In fact one of my favourite sports is baiting Apple fanboys. But I simply can’t help admiring this charismatic man who for so long helmed one of the most successful companies of all time simultaneously bringing design genius and technical excellence to the masses. Steve Jobs, one time living legend, your legacy will live on.