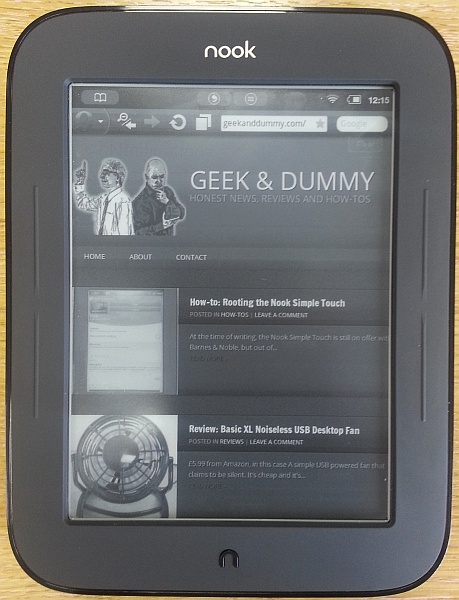 At the time of writing, the Nook Simple Touch

is still on offer with Barnes & Noble, but out of stock. Which is to say, it’s dirt cheap, but ner ner ne ner nerrr, you can’t have one…

If you were one of the lucky ones to pick up the reduced-price tablet before stocks ran out, or if you already had one of these, you might be interested to know that you can unleash some of its secret powers through a process called “rooting”. The tablet is based on the well-known operating system Android and has hidden talents that Barnes & Noble would rather you didn’t find out about (like loading a Kindle app onto the tablet for example – gasp)!

arrived, it was running firmware version 1.2.0. The Nook

has since been silently upgraded by Barnes & Noble to 1.2.1. I mention this because manufacturers tend not to like having their devices’ security bypassed (I’m looking at you, Apple). It’s entirely possible that one day B&N will release an upgrade that makes it significantly harder to root the device. Thankfully, with all versions up to 1.2.1, it’s still possible.

Before you proceed any further, there are a few points to highlight. I apologise for the extreme emphasis, but they’re such important points, I didn’t want you to overlook them.

If your first attempt at rooting didn’t work, don’t panic. You can safely repeat this process as many times as you like.

If you still have your NookManager-prepared MicroSD

card, you may wish to install some Google apps. This gives you Google Market (the earlier version of the Play Store), Gmail, Calendar and a few other bits and bobs.

Despite what I’ve read elsewhere about needing to use a Google account ending in “@gmail.com”. this worked fine with my Google Apps Domain account (which I use for my Android phones). You can now start installing apps using the Google Play web interface (from your computer), but bear in mind that many apps won’t be compatible with the Nook

At this stage, I completely wiped the SD card, removing all existing partitions, using Parted Magic. 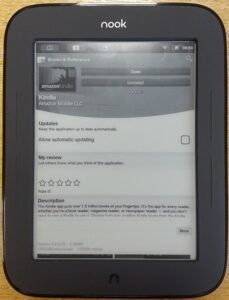 is running Android 2.1 that’s a significant limitation. All apps to be installed must support 2.1. Also, the Nook

has limited memory, so RAM-hungry apps won’t run at all.

There you have it. At no extra cost (except a bit of time), you’ve flung wide open the capabilities of your eReader. As long as you continue to bear in mind the limitations (and advantages) of e-ink technology, you can’t fail to be impressed by this fantastic device.