1. You shall have no other Gods before me. 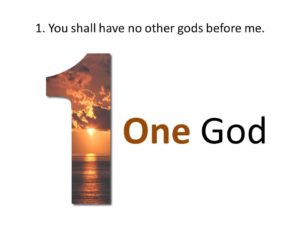 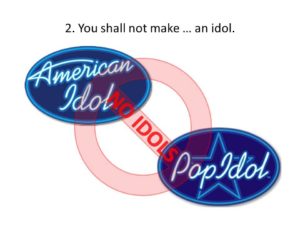 Remember two major “Idol” shows: Pop Idol, in the UK and American Idol in the states.
3. Don’t take the Lord’s name in vain. 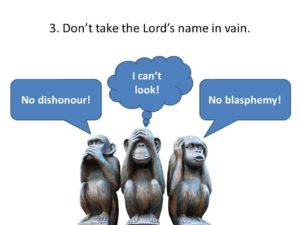 Imagine the three wise monkeys, all determined not to blaspheme.
4. Remember the Sabbath day and keep it holy. 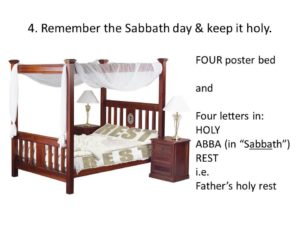 Visualise a four poster bed, with the words “rest” written in it. Note also there are four letters in each of the words, Holy Abba Rest.
5. Honour your mother and father. 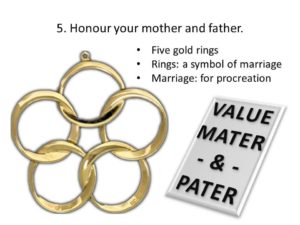 Remember five gold rings (from The Twelve Days of Christmas) – rings being a symbol of marriage and thus parenthood. Also there are five letters in each of the words, Value Mater & Pater. (Yes I know! If it’s silly, you’re more likely to remember it!)
6. Do not murder. 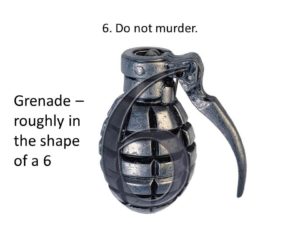 Think of a grenade, roughly in the shape of a number 6.
7. Do not commit adultery. 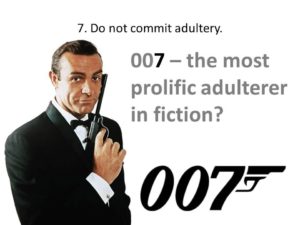 007 is one of the most prolific adulterers in fiction!
8. Do not steal. 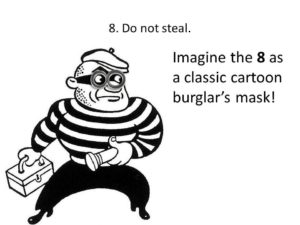 A bit of a stretch, I admit – imagine the 8 as part of a burglar’s mask.
9. Do not bear false witness. 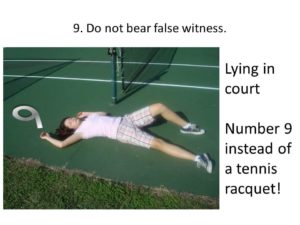 Imagine someone lying down in a tennis court, holding a number 9 instead of a racquet. No lying in court! Get it? (Groan.)
10. Do not covet. 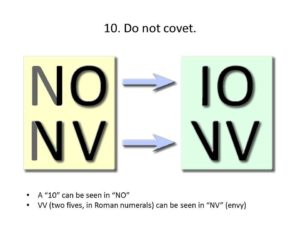 Hard to explain, this one. Start with the letters “NO NV” (no envy). Take the last upright part of the first N and add put it next to the O to get 10. Then take the slant and last upright of the second N to get V and place it next to the V, for VV. In Roman numerals, V plus V is 10.

One Reply to “How to Remember the Ten Commandments”