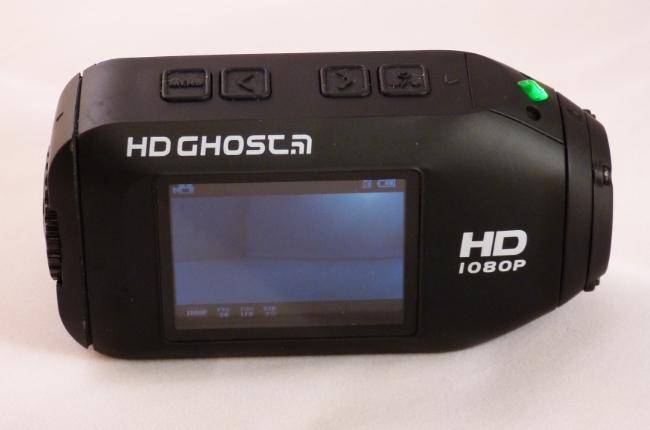 I’m going to start this review in an unusual place for me, with the packaging! Have you ever looked at a review and it starts with someone taking the product out of the box and you just think ‘Why? Not interested!” and then you fast forward? Yes, yes I know, I do the same. So at at the risk of boring you guys…

comes in. It’s designed so well to display the product and also to be used as for ongoing storage that I thought it merited a mention.

is the updated incarnation of the Drift HD

, which was already a pretty successful action camera in its own right. The big draw of the HD Ghost

for me was the remote control unit.

Both the remote and the camera have a durable rubberised coating. If you’ve experimented with one of the cheap and cheerful ‘Chinese’ eBay action cameras, the jump in quality to the Ghost

is very evident indeed, as is the price of course. It feels satisfyingly heavy giving me the impression of quality but perhaps it would be a little too weighty to be used as a helmet cam. Since I plan to mount this on a 4×4 and give it some abuse, that’s not an issue for me.

Now as is my Dummy remit, reading the manual before using the camera is not my style. My first test was to jump straight in. I mounted the HD Ghost on one of my VacMounts Pro series suction mounts

(after all it’s more expensive than my usual cameras and I didn’t want to lose it) and went for a day’s green-laning in the Oldham and Holmfirth area. The weather was horrible, so perfect as a first test for something claiming to be an action camera.

One issue that irritated me about the HD Ghost

was the way it mounted. The standard camera screw thread is located on what is in fact its side. To me it appeared to be the base so when I mounted it for the first section of testing, a laning day in Oldham, all the footage was on its side and I had to flip it in post-processing, which lost the effect of the 170 degree lens. The thread seems poorly located to me and I expect everyone to make a similar mistake the first time they use the camera. Okay, you can spin the lens around but the more you have to mess about with an action camera to set it up, the less I see it as an action camera.

The weather during this testing was horrible: driving rain and a dark brooding day. When I started watching my footage back the first thing I noticed was that all of my cameras with a traditional flat lens had collected beads of rain and a lot of the footage from them was useless. The Ghost HD

has that fish eye lens in a glass dome and whilst rain did hit it and stick for a short while, the shape encouraged the rain to run off. The first gust of wind or bit of speed and the lens would clear again. Definitely score one for the Ghost

. As for being waterproof, the weather was simply horrible all day long and short of being submerged I couldn’t have tested it any more thoroughly. The Drift Ghost

came out with flying colours.

Battery life was comparable with any other camera I’ve used in the action area. I started with a fully charged battery and with frequent activation via the remote, the camera battery lasted about 3 hours. The remote unit lasted all day without any issues. 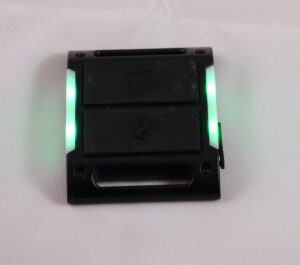 Whilst we are on the subject of the remote, wow, what a feature that is! It flashes in different colours to indicate to the operator what mode the camera is operating in and what the camera is currently doing. The camera options to take single pictures or bursts of pictures (which you might use for stop motion photography?). I stuck with it in standard video mode because that works best for my kind of action photography. However I did test both modes and they worked perfectly and the images were of a good quality. I loved the fact that when the camera was recording, the remote flashed red and it gave me great control of the footage I was shooting and saved me hours in the editing room.

When I did start editing the footage I noticed that the sound recorded by the Ghost was very subtle and of low amplitude. Within the sound recording options I found I was 2 clicks off the maximum setting but even cranking it up to full, the volume level was pretty low. It did however eliminate wind noise like no other camera I’ve used to date so the low volume can be fixed during editing.

To start my testing of the video quality I took the Ghost HD on a Green Lane day with my local Land Rover club during which I also filmed with some of my favourite Kodak Playsport ZX3 cameras (review here). The lens on the Kodak is superior to anything else I’ve used so straight away it had a lot to live up to. I also took some side-by-side sample shots so you could see how the cameras transitioned between light and dark conditions. I did also include my expensive Panasonic Bridge Camera

in this test, which I would never mount on my bonnet for anything other than a test, but I thought it would set a bench mark for everything else!

Everything was testing using VacMounts’

professional quality mounting systems, which I have already reviewed and found to be quality kit at the right price.

I’d suggest you watch this short video because the results could come down very much to personal taste. The colours and quality from the Drift Ghost are what I would demand from a camera costing £250. That coupled with the genius remote system make it a major contender and something I am considering buying for myself (I had a demo unit for this review). My only issue is the way it handles anything other than perfect lighting situations. For use in woodland and overgrown lanes therefore the camera can be found lacking – in fact not as good my cheap and cheerful Kodak Playsports

[easyreview title=”Dummy rating” icon=”dummy” cat1title=”Ease of use” cat1detail=”Its okay. Not too complex but the mounting angle is just plain weird.” cat1rating=”4″ cat2title=”Features” cat2detail=”Honestly can’t think what else it could have. Remote is genius, low light filming average.” cat2rating=”4″ cat3title=”Value for money” cat3detail=”Quite simply, it needs a better lens. for this money it should work in low light.” cat3rating=”2.5″ cat4title=”Build quality” cat4detail=”Its solid and robust and oozes quality.” cat4rating=”4.5″ summary=”It’s a cheaper more flexible Go-Pro with the same frailties but some nice bells & whistles.”]